Covid-19 and its impact on social welfare systems
in the UK, with particular reference to carers 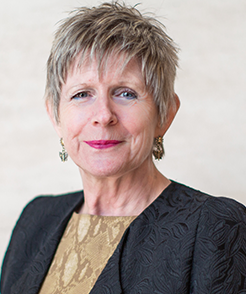 I am delighted to be able to address you on this complex issue, and thank you for inviting me to contribute.

This is not a comprehensive overview, rather a snapshot of the situation in the UK and with a focus on unpaid carers.

The pandemic saw a swift government response to protecting jobs and income, with the introduction of a furlough scheme enabling employers to claim 80% of the salaries of employees unable to work in the lockdown, protection for people who are self-employed and a loan scheme for large and small businesses. These protections are due to end in October and there is currently some debate about whether they should be continued.

The health and care system has come under extreme pressure, especially in the early days of lockdown. As the numbers of people being hospitalised with COVID-19 increased, in order to protect the NHS many older people were discharged from hospital into care homes, which resulted in a subsequent surge in care home infections. The UK has the sixth highest death rate in the world – 612 per million of population compared to 11 per million in Japan, who are ranked 138th in the world.

There was a prevailing sense that health services were prioritised over social care, with more funding, more Personal Protective Equipment (PPE) and more support for prevention measures being seen in the NHS than in the care home and homecare sectors. This has led to a call to bring forward a long-promised debate on the funding and delivery of social care.

Impacts in general in the UK

We have seen a huge increase in local volunteering which local communities are keen to keep going, even when the pandemic eases. Volunteer Scotland published research in July which found that three quarters of all Scots had volunteered in some way during COVID-19. However, as people go back to work and winter approaches, we have to ask if and how this will be sustained.

There has been a rise in the number of people claiming welfare benefits. Nearly 2 million people applied for Universal Credit between 16 March and May, around six times the normal rate. There was a boost in payments of around £20 per week for Universal Credit users to recognise additional costs and hardships under COVID-19 which will continue for one year (until the end of March 2021). However, there was no increase for older style benefits such as Carer’s Allowance. Scotland has provided an additional payment for carers - £260 for six months.
The unemployment rate is currently just over 4% but this may well increase when the furlough scheme comes to an end in October. The main areas of unemployment shifts are from older workers i.e. over 65s, part time workers (most likely women) and the self-employed. Carers make up a significant proportion of these groups. There are a large number of workers who are not actively looking for work – again many of them carers – who are not included in these figures.

There has been a drop in local government income because of lockdown which has affected income from areas such as car parking charges and business rates. Projected additional expenditure in England by April 2021 as a result of COVID-19 is £3.6 billion, against a projected loss of income is £5.5 billion (MHCLG, June 2020). Some additional funding has been provided for additional costs (see below), and some to protect lost income, but most local authorities are reporting a shortfall. Most of the predicted additional expenditure is for adult social care, and there are real concerns about local authority expenditure for the future.

In terms of additional funding to offset these costs, an Infection Control Fund in England of £600 million was announced in May 2020 largely to deal with the crisis in care homes, but also to give flexibility in supporting extra costs for care in the community. Local authorities were also given £3.2 billion to deal with the extra costs of COVID-19 but this does not match the additional and projected expenditure and they are facing a financial crisis. COVID-19 has shown how fragile our social care system is, based on years of underinvestment.

What has happened to carers in COVID-19?

There has been a significant increase in the numbers of people caring since the coronavirus outbreak. 17% of the general public were already providing unpaid care before the crisis. This equates to an estimated 9.1 million or one in every six adults, and carers when they are unsupported can experience significant financial, health and wellbeing impacts. When polled in May 2020 an extra 9% of the general public said they were providing unpaid care but that they had only started doing so since the coronavirus outbreak. This equates to an estimated 4.5 million unpaid carers, 2.8 million of whom were combining that care with paid work. This means there are now 13.6 million people caring in the UK – I in 4 adults (26%).

Many carers reported self-isolating with the person they care for – a partner with a serious health condition, an older parent or a disabled child – because day services had closed, care services had been cut or because care staff who would normally support them at home could not access PPE. Many of these carers were also working from home and sometimes managing home schooling alongside. Other carers could not visit the person they normally support at a distance for fear of passing on the infection

When asked what were the greatest challenges they faced, carers said:
• Managing the stress and responsibility of caring (71%)
• The negative impacts on their physical and mental health (70%)
• Not being able to take time away from caring (66%).

Further research by the Universities of Sheffield and Birmingham with Carers UK in June found carers experiencing food poverty and in one of the biggest groups of people using food banks in the UK.

All of this adds up to a grim picture of caring in COVID-19, and more than ever the UK has to find ways of supporting carers who otherwise face significant impacts now and in the future. Our long awaited – and long promised - debate on social care must take carers into account when we look at how care and caring are to be sustained.

Madeleine Starr MBE is Director of Business Development and Innovation at Carers UK, a not-for-profit organisation that works to improve the lives of unpaid carers, through campaigning and lobbying at local, national and international level and providing information, consultancy and services through its helpline, digital platforms and mobile app, Jointly.
Madeleine joined Carers UK in 2000 to lead its work on carers and employment.
In 2009 she was recognised as a Working Families Pioneer for ‘her sustained and successful campaigning for carers’ employment rights’ and for her influence in establishing the Employers for Carers membership forum, launched in 2009.
She is currently leading Carers UK’s work on digital innovation in health, care and the third sector.
Madeleine was awarded an MBE in 2012 for services to employment.